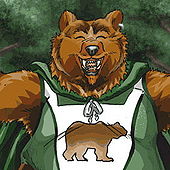 Belic has attended several conventions, including Anthrocon '03-04, Further Confusion '05-12, What The Fur? '10-12, and FurFright '03-12. He often supports the conventions he attends by working staff, and in the past he has performed in Masquerade/Talent Shows.[1]

Belic and K'gra Leopard are also the webmasters of The Furry Forest[2], a community website they set up in 2002 as "a peaceful, flame-free, yiff-free home for all furs great and small, young and old."

Belic and his wife, K'gra Leopard, created the Halloween-themed FurFright convention in 2003 at a cabin in Middletown, Connecticut. Originally 30-50 attendees were anticipated, but more than 160 people registered, and the event turned into an annual convention. FurFright, now in its 10th year, and hosts 1500 attendees from all over the world.

His fursona is a big, fat Kodiak brown bear, often depicted as a pirate, hockey player, knight, or cop.