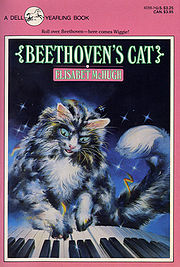 Front cover of Beethoven's Cat, as published in 1991. Cover illustration by Katherine Huerta.

Beethoven's Cat is narrated by and about a pet cat, Ludwig (commonly Wiggie) who becomes convinced that he is a descent of Beethoven's cat, or is even a reincarnation of Beethoven himself. Other characters include Josh, another cat in the household; Winston, a bulldog; and their human family, the Carters.