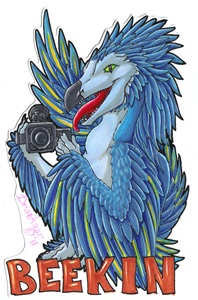 The Beekin character was born at the end of the 1990s. Before that, he mainly used the name Dragon Creature (or dragon_creature).

Over the years, Beekin has changed species several times, representing himself with a microraptor/utahraptor, raven and dragon. Each character reflects a different side of him, and all have two things in common: the name Beekin and green eyes. You can also see him as a female Nevrean named Kaakoulou or a female Avali named Eitako

The story behind the name Beekin is simple. When he moved back to Montreal, it was a new beginning for him. He simply chose to use the word "begin" and remove the "g" to add another "e" and a "k" to keep the sound similar when the name "Beekin" is spoken quickly.

This is his first character he used. A bronze dragon not bigger than a human. Because of the confusion between him and the Beekin of Furcadia he start looking for another character.

The raptor idea is coming from a game called Secondlife. At the time, the only dinosaur avatar available were Velociraptor and Utahraptor made by Nargus Labs. Later as he was browsing on Fur Affinity website, he stumble on a few Microraptor drawing and he love so much this little feather ball that he adopt this creature as his main character. In 2013 he got a partial Fursuit of his Microraptor fursona.

The raven character is a more personal side of Beekin. He also have a fursuit of it. In 2019 he sent a picture on him disguise as Canuck, a famous crow in Vancouver that has his Facebook account Canuck and I. The picture have been posted on Halloween 2021 on the Canuck and I account.

The Nevrean character came to completion after he moved in British Columbia. As he settle in, he found that Kaakoulou was more representative of himself and start using her more often. He also have a Fursuit of this fursona.

Eitako is a work in progress fursona, mostly use in VRChat.

He was a member of the groups Francofur and Monfur.

From 2018 until now, he is the A/V Lead for Howloween convention.

From 2019 until now, he is the AV/Lead for Vancoufur convention.

From 2019 until now, He is the A/V Lead for Vanhoover Pony Expo convention.

Between 2007 and 2009 Beekin was involve in the french France furry community in the game Second Life.

Between 2018 and 2021 Beekin was involve with a Vilous community on Second Life on the Sailzane sim, and created a lounge the Jade Judda. This lounge got transfer to VR Chat in 2021.

Beekin don't consider himself as an artist but more as an hobbyist.

In real life, Beekin works part time as a freelancer in the media industry. He can't disclose his regular employment at this time. He tries to keep his furry life separate from his work life.