Beauty and the Beast (TV show) 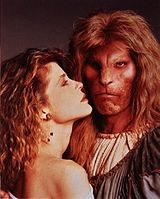 Beauty and the Beast was an American television series, originally broadcast in 1987. It is an updated version of the Beauty and the Beast fairy tale, centered around the relationship between Catherine (Linda Hamilton), an attorney who lived in New York City, and Vincent (Ron Perlman), the beast who was an anthropomorphic lion who belongs to a society of misfits and outcasts dwelling in the tunnels beneath the city. One of the show's interesting quirks is, unlike every other rendition of the tale, the Beast does not transform into society's idea of beauty after gaining the love of Catherine. Rather, Vincent's inner beauty is allowed to remain the focus of who he is and it is Catherine's former "shallow" self that is the ugliness transformed by their love of each other.

The premise of the series was inspired by the fairy tale "Beauty and the Beast"; in particular, there is some connection to the Jean Cocteau French film of 1946 La Belle et la Bête. The show often dealt with antagonists in New York's organized crime world, while also following the relationship of Catherine and Vincent.

Vincent
It was both a romantic and crime drama giving it an unusual appeal. While the show was cancelled after only three years, it continues to have a large fan base online in both the mundane and furry worlds. Because of its romantic side, the demographic tends to swing towards women. Trade in taped episodes were only available through the mail, fan newsletters and furry conventions, until the series was re-released to the public market in DVD form on Valentine's Day 2007.

The show is praised by many furry fans to be one of the few and best cases of live-action furry programming out there, although it cannot be exactly considered such per se, as it is never established if Vincent is an actual lion or if he merely possesses leonine features. The beast makeup was devised by veteran Hollywood makeup artist Rick Baker.