Beautiful is a song and music video by Moby. It is notable within the furry fandom for its music video, which was filmed entirely with a fursuited cast. 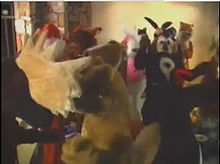 A swingers' party - it's all fun and games until someone gets hurt . . .

The video is situated around a swingers' house party. Couples of male and female creatures of the same species arrive. The party gets off to a good start, although it is made clear that the male moose has had a little too much to drink.

Everyone has a lot of fun dancing. The hostess then comes around with a bowl of keys and the females get to pick one, pairing up with members of different species. The rabbit woman selects the moose, leaving her rabbit partner astonished.

The evening wears on. The male rabbit finds himself unable to settle down with his swinging partner, and goes looking for his own woman. He is unable to find her, though he does run across another pair in the process of heavy petting. Ultimately, he steps outside, only to find a nearby car rocking suspiciously.

Opening the door, he drags out the moose, who puts up a fight until the rabbit pulls out a gun. The rabbit shoots, and the party members rush outside to find the two swingers dead, with the male rabbit standing by, then turning away. A raccoon tries to convince him to put the gun down, but he is too late, and is sprayed with stuffing from the rabbit's head as he commits suicide.

to clear up some confusion, the song 'beautiful' is SUPPOSED to be simple. it's a song that was inspired by our collective obsession with simple but attractive celebrities, and in particular our obsession with celebrity couples. on one hand 'beautiful' is a simple and sweet love song, but when i wrote it i kind of had this vision of 2 very simple but attractive celebrities sitting across from each other at dinner congratulating one another on how attractive they were. just thought i'd clear this up. -moby

Species portrayed in the video include: