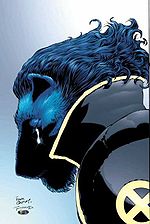 Beast (aka Dr. Henry "Hank" P. McCoy) is a fictional character created by Marvel Comics and is a member of the X-Men, Defenders and the Avengers. He has been portrayed as an anthropomorphic ape-like creature and also recently as an anthropomorphic lion. His mutant ability has matched these forms. In his original form, he had ape-like agility and heightened senses. When he became a lion, his powers shifted to focus more on the strength and senses of a lion. Because of his bestial nature, Beast always struggles to control his feral urges from taking over. Beast has appeared in various places including comic books published by Marvel Comics, cartoons and movies. 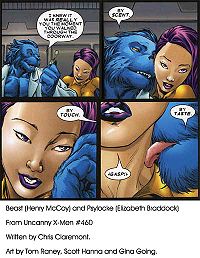 Beast demonstrating his ability to identify someone by his heightened senses to Psylocke in Uncanny X-Men #460
Retrieved from "https://en.wikifur.com/w/index.php?title=Beast&oldid=398017"
Categories: