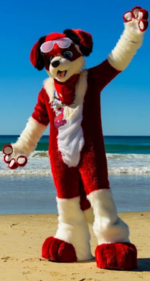 Beagle.in.red (often shortened to simply Beagle)[1] is a writer, YouTuber and fursuiter who lives in Madison, Wisconsin, USA. His YouTube channel has gathered more than 33,000 subscribers as of February 2019.[2] He also serves as the Director of Public Relations for AquatiFur. 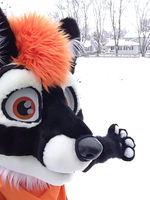 Wip/Tarou fursuiting in the snow in Wisconsin.

Beagle.in.red's fursona is a red and white beagle with black highlights on the edges of his ears.[5] The colors are based off of his alma mater, University of Wisconsin—Madison.

Beagle.in.red became a regular YouTuber in May of 2016. He has uploaded over 40 videos onto his main channel as of September 2017. His content mainly consists of vlogs, convention videos, and collaborations related to the furry fandom.

Beagle.in.red studied English Literature at UW-Madison with a focus in creative writing. He has written furry-related stories on his FurAffinity account including the novella The Problematic Life of Sam Woods.[7] His work has been published in Heat 13 by Sofawolf Press and in the Anthrocon 2017 and AnthrOhio 2018 conbooks.