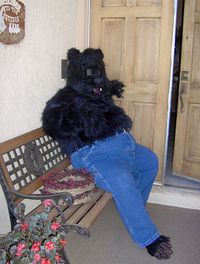 Ba'ar (a contraction of Bartholomew Bear) is a fursuiter who lives in Chandler, Arizona, United States.[1] His fursona is a bear, which is also his totem animal.

Ba'ar began fursuiting in 2001, when he saw all the fun the fursuiters were having[clarify] and decided to have a fursuit made for himself. Acquiring some ursine prosthetics from Super Jay, Ba'ar's costume took shape and, since its debut at Anthrocon 2001, has undergone several alterations.[2]

Ba'ar calls Further Confusion his home away from home, but has been seen at other conventions, such as Midwest FurFest, ConFurence, and Morphicon.

Ba'ar can be seen on MUCKs, most notably Spindizzy, where he can be seen in the Rose Garden chatting cheerily with the usual crowd. 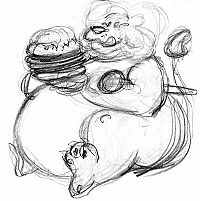 Sergei enojying yet another meal

Ba'ar's character Sergei is a 6 foot tawny lion who loves to eat - and it shows, his body being liberally padded with fat. He was active on FurryMUCK, Tapestries, and his creator's own roleplay mailing list Zaftig City. His creator also ran the Fat Furs mailing list.