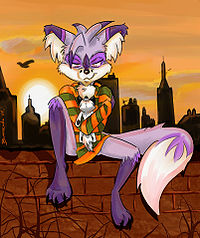 Barracuda, (b. 15th October) is an anthro artist who identifies mostly as a fox. She lives in Manchester, England, U.K. and is approachable, sociable and friendly. She appears to share a close relationship with Lepricon as they have been seen to occasionally collaborate on artwork together and seem to be inspired by one another.

Barracuda is a self-taught artist but has some art experience from college in the past. Her diplomatic ability to think outside of the box and her eagerness to learn new skills makes her artwork pleasing to watch as time progresses.

Barracuda's character is a female lavender, mauve, violet and white anthropomorphic fox named Kamazu. She can also been seen as feral at times and has been assigned her own fantasy species named Vulgar-Vulpus. The character's species description seems to be an ongoing evolution for the artist as each new piece of art puts the character in different environments and situations.

Barracuda commonly uses themes of blood and predation in her artwork but tends to steer clear from fetishes that involve forms of Vorarephilia and yiff. She regularly takes commissions and trades but prefers to call the shots, she doesn't really take any interest in regular character profile artwork yet enjoys experimentation and ideas that appeal to her ever-changing style.

Aside from art, she enjoys video games and music and will at times produce artwork that involve her favorite games and subjects. She also appears to have a general knowledge in almost any subject yet it can only be easy to hold her attention for a short time as she can be evasive when it comes to idle chit-chat.