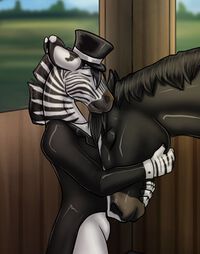 Bariki's zebra fursona Raffa with one of his horses. Art by Brushfire. 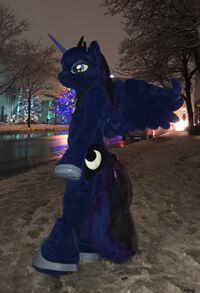 Bariki, also known as Raffa (born November 1982 - died August 2021[1]), was a British-born fursuiter and furry staff member who used to live since 2015 in the San Francisco Bay Area, California, USA with his husband, Trigger. Bariki was a career software engineer working in Silicon Valley.

Bariki had been a part of the furry fandom since 1999. His first convention was Further Confusion 2008 in San José, California.

In 2013, Bariki became chairman of the board of directors for LondonFurs Management Ltd.[2].He held this position until his relocation to the United States in late 2015. He remained a director of LFM Ltd until August 2016.

He has staffed a number of conventions over the years in a variety of roles:

Bariki's involvement with the LondonFurs, a tri-weekly furry meetup in Central London, began in 2008 as an attendee. He joined the organizing committee in 2010.[3]. He was one of the founding directors of the non-profit company, LFM Ltd, that was formed in 2012 to formalize community fundraising, provide liability insurance[4] for the group's public events (specifically for the fursuit walk, which had been halted because of liability issues), and to organize the hugely popular LondonFurs summer and LondonFurs winter parties

Bariki's fursona was for many years a silver anthropomorphic horse. However, he had become better associated with his fursuit Raffa''s zebra identity since acquiring him in 2009. In 2016 he acquired another fursuit from the My Little Pony: Friendship is Magic fandom, Princess Luna.

Bariki owned three fursuits with another one being built on [[commission when he passed away:

SpookWolf's first appearance was at Eurofurence 14 - Raffa's was at ConFuzzled 2009 - Princess Luna's was at Midwest Furfest 2016.

Bariki passed away in August 2021 from Heart issues.