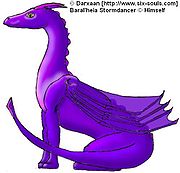 A drawing of Baral'heia before his scales became white
Baral'heia Stormdancer [bŭh-rôlʹhē-ŭh] (born 14 January 1985) is a Western dragon from Oklahoma City, Oklahoma. Though he considers himself part of the Furry community, he identifies himself as Otherkin and enjoys the company of others who identify themselves as such. He can even be found loitering about in the Therian community on occasion.

Involvement in the Furry Community[edit] 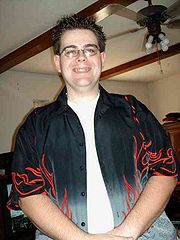 An older picture of Baral'heia in real life
Baral'heia helped to unite the Oklahoma furry community when on 29 September, 2002, he started OKFursII on Yahoo! Groups to replace the older, defunct OKFurs community[1]. OKFursII's popularity has swelled in it's more than 5 years of operation, and currently serves more than 130 members both in and out of the state of Oklahoma.

He was also one of the founding members of Oklacon[2], The United States' first outdoor-format furry convention. As a result, he served on the board of directors for Oklacon's parent organization, Oklahoma Association for the Anthropomorphic Arts, as Treasurer for the first two years[3][4].

Before they ceased operations at the beginning of 2008, Baral'heia volunteered his services to the furry internet television channel LFUR-TV as cameraman and production coordinator. His videography work can be seen on LFUR's MFM 11 convention DVD, as well as LFUR's newscast at MFM11.

As many of his friends are also part of the Furry community, Baral'heia attends cons on a semi-regular basis to see them. While his favorite conventions are Oklacon and Mephit Furmeet, he has been spotted at Midwest Furfest and has been considering showing up at Further Confusion and Furry Weekend Atlanta.