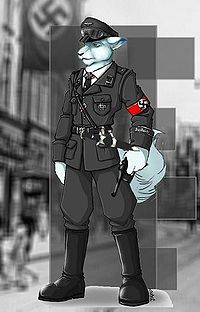 banalheart (purposefully spelt with a lower case b ) is an American anthropomorphic fan and artist originally from Mobile, Alabama. He is most notably known as the founder of the Nazi Furs community on LiveJournal[1]. banalheart serves his community as an EMT and k9 Search and Rescue Technician in real life.[2] 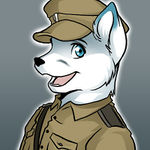 Shoji, as illustrated by HMO.

banalheart's fursona, Shoji, is a male anthropomorphic folf, 5'11" tall, with a slight muscular build often portrayed as a WWII era German Sanitäter. His markings are similar to that of an arctic fox with the exception of eartips, tail tip, gloves and socks which are a light blue in color and his mop of blonde hair. He wears the black M36 uniform of a Sturmbannführer in the Allgemeine SS. 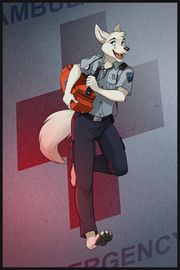 In the Modern age, banalheart's fursona appears much the same, but more befitting his role as his creator's avatar typically depicted in EMS uniform.

banalheart attended the inaugural sessions of both Rocket City FurMeet (in May, 2003) and Furry Weekend Atlanta (in February, 2004) and has been an active part of both conventions since. He has hosted panels at FWA and Mephit Furmeet, and is currently a member of Staff at RCFM[3].

banalheart created the Nazi Furs LiveJournal community in March of 2005[4]. The community became the first unified group of furs specifically interested in the history of Nazi Germany and the Third Reich. According to banalheart the intended purpose of the community was to be an umbrella community encompassing the varied interests of individual furs within a specific topic. This was intended to include, but not be limited to, reenacting, uniform fetish, military history and tactics, and anthropomorphic art set during WWII. banalheart himself creates visual media of his characters within a WWII setting, depicting his fursona as an medic with the Ahnenerbe attached to the Rasse-und Siedlungshauptamt, a group that acted as the "official" archaeologists of the Party, dedicated to unearthing (and, some said, fabricating) evidence of German historical greatness.