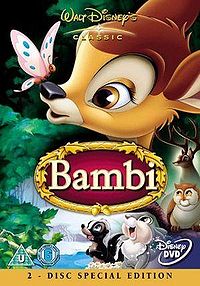 Bambi is an animated film released in 1942 by the Walt Disney Company based loosely on the 1923 novel of the same name by Felix Salten.

Bambi was the first film by Disney to feature an all-animal cast of characters presented in a realistic style, as opposed to earlier highly simplified and stylized anthropomorphic characters such as Mickey Mouse and Donald Duck. In fact, the level of realism achieved in the artwork for this film is one factor which later brought some criticism upon it. The animal characters in Bambi are non-morphic, but speak English amongst themselves and occasionally display certain humanlike mannerisms.

Since Disney's packaging of the story for the movie was apparently intended for the entertainment of younger viewers, there is no coverage on the subject of predation among animal species. The focus of the story on the plight of the deer has been widely vilified as an attempt to garner undue pity for the animals, as well as to ascribe human emotions to the characters. Whether or not it was the intent of Disney or its writers to misinform the public about the lives of animals, such charges have been repeatedly laid, in various forms, over the ensuing decades. In fairness, the Disney company did release a number of live-action films in the 1950s and '60s depicting animal behavior in a realistic or documentary fashion, as well as two documentaries within the last decade.