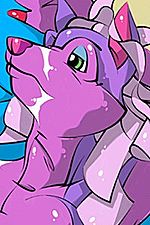 Balloonies, also known as looners, are a particularly fanciful style of furry character which have become a small but popular sub-genre over time. The basic concept of the Balloonie is a living, animate version of a "real" creature made of rubber, latex, or similar materials. Some have been crafted from other substances such as soap bubbles or bubblegum.[1] Balloonies can be considered a variation of Inanimorph, or characters that are composed of inorganic materials or substances not ordinarily considered alive.

The traditional Balloonie is styled after latex balloons with an emphasis on being a three-dimensional cartoon character; able to bend, stretch, and expand, but in (fictionalized) reality. They usually come with either a balloon knot (as in an actual latex balloon) or an air valve on their body. Within Furry fandom, an example of a Balloonie character who has often had expanding properties is Karl Jorgensen's Xydexx Squeakypony, a purple, anthropomorphic unicorn. One of the main characters of the webcomic Latex Blue, a blue catgirl named Iris, is a Balloonie.

In roleplay and fiction, the explanation for such characters has ranged from magical to technological, and in some cases, strange and exotic biology. Some balloonie characters have the special feature of being unpoppable, meaning no amount of force or sharpness can pierce their surface. Players who create unpoppable characters frequently advertise this feature.

Not all Balloonie fans enjoy the theme of cartoonish deformation or the properties of latex balloons. Many of these characters are patterned after inflatable pool toys. These characters are often conceptualized as being constructed from PVC or vinyl plastic. Some characters have exaggerated features like riding handles, hanger loops, and unrealistic colors or product information printed on them to suggest that they are still toys despite their ability to move, think, and speak.

In some roleplay venues such as MUCKs, the fantastical nature of Balloonie characters might be seen as unrealistic and inappropriate, depending on the setting. Tongue-in-cheek derision of such characters has on occasion taken the form of a non-consensual scene where a character acts out Popping a Balloonie with a sharp object. Some fans see this as particularly mean-spirited behavior and the equivalent of inflicting serious harm on a flesh-and-blood character. In most cases, Balloonies have shown a tendency to be seen as playful and harmless characters.

Sometimes, a balloonie may be somewhat inanimate, but a lot of characters may often only be inanimate if they are deflated or popped. The air inside themselves often acts as muscles, and sometimes the balloonie could even be full of some other kind of material, often a liquid-like gel, water, jello, or even Latex Foam. (Often making them harder to pop)

Elastifurs are another kind of balloonie who are rather rare in the fandom, they sometimes call themselves hybrids between flesh furs and balloonies as they are made of rubber, latex, or a similar substance but are furry on the outside. They are also known as Bioballoons, as the name is easier to pronounce and is easier to fit in the flow of a story.

Balloonies are brought to life through a variety of means. Most are considered to be magical creations of some kind, but this creation may be deliberate or accidental. They may have been created as "regular" balloon-like toys and animated, or be "real" animals that have been turned into inflatables. They may even be one creature trapped within the shell of another. Some balloonies and inanimorphs have been imagined to be the products of "mad science" and technology; such as nanomachines used to give life to lifeless materials.

When roleplayed, the creation of a balloonie tends to come about through the deliberate action of a second person. However, the method varies widely. The "victim" may be tricked into consuming some kind of food or drink that has the effect of converting them into a balloonie. They may come into contact with some kind of substance that covers them with a balloon-like coating, perhaps applied directly by the second party, perhaps just prepared in advance by them (such as a pool). They may simply find that the touch of the second party has the desired effect, particularly if this party is a balloonie already. Often there is an element of coercive persuasion involved, especially if the second party is looking to have them as a toy to play with.

Many of the balloonie characters appear to have been conceived as having always been such creatures. Also, a few characters exist for whom transforming into a balloonie is a voluntary ability, and both states are equally natural.