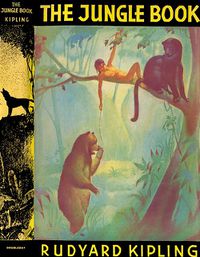 Bagheera, Baloo and Mowgli on the cover of the US edition of The Jungle Book, Doubleday, c.1932

Born in captivity in a menagerie, he eventually escapes into the jungle, where he wins the respect of all its other inhabitants. This background gives him a special insight into the behaviour of humans. When Mowgli is adopted by the wolf pack, Bagheera buys his life with a freshly killed bull, and helps raise him as one of the pack, acting as one of the "man-cub"'s mentors. When Mowgli reaches adulthood and has to return to human society, Bagheera frees Mowgli of his debt to the wolf pack by killing another bull.

Bagheera as depicted in Disney's adaptation of The Jungle Book

Bagheera as depicted in the cartoon series Jungle Cubs

In the Disney adaptation of The Jungle Book (1967), Bagheera acts as the narrator of the story, and is portrayed as a clever, serious and responsible character, being the first to find Mowgli, and the one who finally returns him to the human village. He and Baloo, the bear, act as Mowgli's guides and mentors in the ways of the jungle but, in contrast to Baloo's free and relaxed attitude to life, Bagheera realises that the man-cub is not safe in the jungle while the tiger Shere Khan is free to roam, and is continually frustrated in his attempts to explain the danger. The character was voiced by English actor Sebastian Cabot.

In the prequel cartoon series Jungle Cubs, Bagheera (or "Baggy" as he is affectionately called), is the youngest of the group, a sensible and solemn panther who rarely gets into trouble and with a preoccupation with being clean.

He also appears in the anime version of the Jungle book.