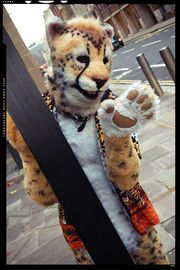 Badgerguy is a fursuiter who lives in Birmingham, United Kingdom with fellow fursuiter and furry artist Colifox.

While his fursona is a Badger, he owns one fursuit named Rallicat, whom he debuted at Further Confusion 2007.

He is the principal event organizer for the Spirit Furs UK group, the most successful one being the now annual canal trip. He is also the head of the public relations department for ConFuzzled.