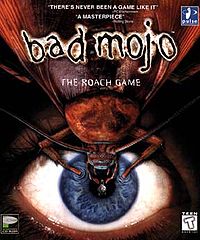 Bad Mojo is a puzzle-based computer game in which the player takes the role of a human who is transformed into a cockroach.

Bad Mojo was originally released in 1996 by Pulse Entertainment. In 2004, Got Game Entertainment re-released the game as Bad Mojo Redux.

The player's character is an entomologist named Roger Samms (a reference to Gregor Samsa from Franz Kafka's The Metamorphosis) who lives above a filthy bar owned by Eddie Battito. Samms has embezzled a million dollars worth of grant money, and is planning to flee the country to start a better life when a bug-like locket, that belonged to his dead mother, transforms him into a cockroach.

Using a sewer system that connects the various parts of the bar, Samms must explore his environment from his new perspective, avoiding such dangers as rats and his own pet cat.