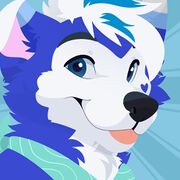 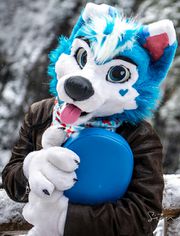 Baby Blu wearing a brown leather jacket and his signature bandanna, while holding his blue popsicle prop (by SinghaTheLion).

Baby Blu's fursona is a blue and white husky.

Baby Blu owns three fursuits, one made by Made Fur You, and the other 2 fursuits made by Don't Hug Cacti. He is often seen wearing either his custom kigu, which is designed in the likeness of his fursona, or his blue Yukata printed with white petals, with a yellow obi printed with white flowers.

When in full or partial suiting while wearing his kigu, he almost always has on his signature bandanna, which is blue and white with multiple goldfish on it He usually carries a prop popsicle with him as well as a prop camera. He is known for his signature high-pitched scream. He, like most fursuiters, does not speak when suiting, however, he does make high pitched noises, which seems to be his language when fursuiting.

Baby Blu's Made Fur You suit debuted at Anthrocon 2015. It features a blue heart on its left cheek right below the left eye. The light glare in the suit's eyes is in the shape of hearts. The suit has a blue heart located on its rear below and to the right of the tail, on the suit's "behind". An image exists of Blu where what appears to be whiskers are present on the suit head. Four were located on the muzzle, two on each side, and an additional four were located on the edges of the face near where the white fur meets the blue fur. These whiskers appear to be no longer present on his head. Whether they fell off or if he removed them is unknown.

On November 18, 2018, Blu, along with Xusho, Laetans, and countless other fursuiters attending Anthro Northwest 2017 had cameo appearances in the show This Is Life with Lisa Ling in the episode titled Furry Nation, which aired on CNN.[citation needed]

Blu is a massive fan of Subaru, and loves the Impreza, WRX, and WRX STI models. According to his Twitter bio, he is a Subaru Ambassador,[clarify] as well as an automotive enthusiast. He is also an avid fan of Subaru rally races and has a liking for cars in general.

He has stated, in reply to a user on Instagram, that he has a caffeine addiction, and has a liking for coffee, particularly Starbucks. He also has a liking for the Swedish retail store Ikea, and even went to the first Ikea store in Sweden.[citation needed]