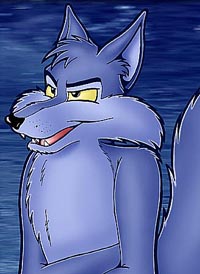 BigBlueFox, as drawn by himself
File:Anthrocon 2007 Big Blue Fox.JPG
Big Blue Fox at Anthrocon 2007
BigBlueFox (often just called BBF) is a German furry artist and fursuiter who often portrays himself as a blue fox of varying size. He's also a video, photography and music enthusiast, and a staff member of Eurofurence.