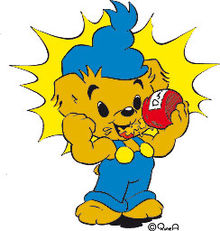 Bamse is a Swedish comic for kids created by Rune Andréasson in 1966. The character Bamse is a tiny brown bear that becomes "The world's strongest bear" if he eats his super-honey, in Swedish called dunder-honung.

Other central characters in the comic is the rabbit Lille Skutt and the turtle Skalman. Bamse has had its own comic-magazine in Sweden since 1973.