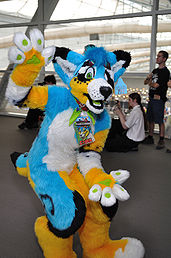 Syber has been interested in anthropomorphics since 1999, and began drawing and creating anthropomorphic characters as a pastime; she became publicly active in the furry fandom early in 2007. Syber chose the name Sybe' when she was nine years old. This was the name of her character at the time; a dragon/wolf hybrid.

Syber's character is a female Coydog, an Australian Shepherd/Coyote hybrid. She could also be considered a sparkledog due to her bright coloring. She has a perky personality and loves offroading, attention, and Monster Energy drinks.

Syber has commissioned many versions of her character by different fursuit makers, which she sees as equivalent to getting commissioned artwork at a bigger scale. Eighteen have been made as of March 2017:[10]