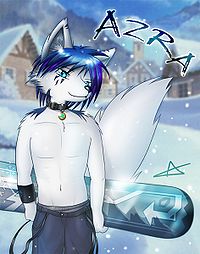 AzraFox, also known as Azra, (born August 6th, 1988)[1] is a furry artist who is a resident of the United Kingdom. He attends York University to study Computer Science. His fursona is a male Arctic fox with medium-length blue hair with hints of purple, blue eyes, and triangular markings on both cheeks. Azra is a regular at the NorthernFurs meets.

Fursuit Para-skiing (foxes can fly!) video of Azra in his fursuit.