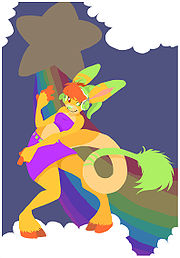 Aycee, also known as AC, Ace, Roanoak and PeppermintHusky,[1] is an artist. They are non-binary. Their fursona is a chimera, a combination of a lion, snake and goat from ancient Greek mythology.

Aycee has a striped hyena personal fursona named AC and an AC fursuit was made by Ruffled Designs fursuit studio and debuted at Biggest Little Fur Con 2015.[2] 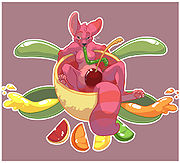 AC has a few notable characters. The first being their fursona and the second most well known probably being her citra Lorraine. Lorraine is a lesbian citra with a bright pink furcoat most likely of the 'grapefruit' variety of citra. She is referred to as a citra rather than citrus due to her reverse homosexuality.