AxxiosGrey (Axxios, formerly known as YinzBlindHund, NormanRoy, KnuclesNRum8910 and Billiont94) is a Pittsburgh-based furry writer, designer, highway traffic flagger and community activist on iFunny until he was banned from the site in February 2018. As of July 16th, 2018 the account has been reinstated and acts as it did before. 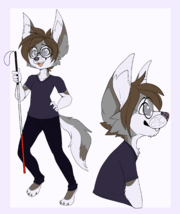 This is Marcus; AxxiosGrey's Fursona.

AxxiosGrey's fursona is a blind grey wolf hybrid by the name of Marcus Rison. Marcus is the main character in a majority of his work on iFunny, which seem to be snippets from a larger work that was written or published off of the application. Marcus is a blind young adult with the ability to use echo location and his sense of smell to navigate. The plot of the story he is in (if any) are unclear and seem to be known by it's writers or friend of the author; AxxiosGrey.

Axxios posts furry content on iFunny in addition to memes and conservative political pieces. According to other miscellaneous posts, he seems to appreciate rock and heavy metal music, philosophy, SFM or YouTube Poop content and general viral videos.

On February 14, 2018, Axxios intentionally agitated[clarify] groups dedicated to trolling and doxxing furry-themed iFunny accounts. As a result, several iFunny accounts, including AxxiosGrey's, were banned. On June 16th, 2018, iFunny announced their plan to provide amnesty; a massive unbanning of accounts banned before the first of June that calendar year. Under the condition, AxxiosGrey's account was unbanned and he is active on it once more. Then AxxiosGrey's account got banned a second time for ban raiding.

After his ban from the application, rumors started to surface that he may have returned under a different alias; Confursative. The ties to the two accounts were lousy at best and cite that there is another fast-growing Conservative furry account from Pittsburgh. These rumors were confirmed to be true via a post on his account AxxiosGrey following his amnesty. It is his official alternative account.