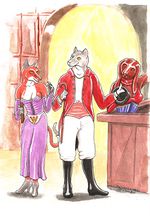 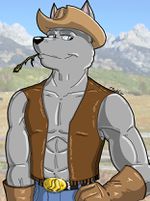 Axel Wolf in his cowboy outfit from 2007. Art by Dylan Rinald. 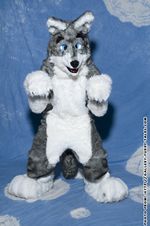 Axel Wolf in his fursuit at Furfright 2008. Photo taken by Ace Bearpaws. 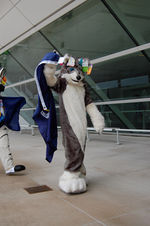 Axel Wolf joined the fandom back in the fall of 2002 by finding a transformation site[clarify] that dealt with furry transformation art and stories created by Thrashwolf.

Axel Wolf fursona is a rubber[clarify] gray wolf that some people[who?] think looks like a gray fox because of the white arms, legs and the white tip at the end of his tail.

Axel Wolf owns one fursuit based on his fursona done by Magnus Diridian. A updated version is[when?] being created by Hindpaws (hand and foot paws), and Chinook McMutton Z (head and bodysuit).