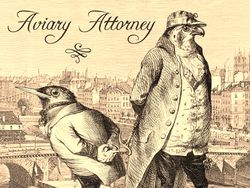 Aviary Attorney is a point and click video game developed by Sketchy Logic and released in 2015.

The game is set in 1848 in Paris, France, within a world populated by anthropomorphic animals. The story follows the adventures of lawyer Jayjay Falcon and his assistant Sparrowson, as they defend clients in a city headed towards revolution.

The music in the game consists of the compositions of Camille Saint-Saëns.[3]