This article is about the fursuiter, not to be confused with Autumn Vixen, a fursuit owned by Rabbit in the Moon. 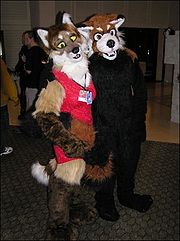 Autumnfox, often known simply "Autumn", originated in the therian community in 1994, discovering furry about a year later. She considers herself a member of both, but sees each movement as distinctive despite some overlap.

Autumnfox's name changed over the years, but has remained the same since discovering furry. She has gone by the following names: Twilight, Twilight Autumnfox, Wadti.

Autumnfox's phenotype originally was a raccoon but soon became a red fox. Her fursona is also a red fox, appearing with greyed markings upon her forehead and haunches. While her form is normally anthro and digitigrade, she does often shift toward a non-morphic form, or somewhere in between, being equally adept at walking on two legs or four.

An avid fursuiter, Autumnfox first appeared in a fursuit by the same name at Albany Anthrocon '97. Her fursuit reportoire includes:

Once a professional wildlife artist, Autumnfox has all but stopped producing traditional art. She is presently working on improving her fursuiting skills, and has done several commissions for tails and paws.

While Autumnfox has not MUCKed in years, and is only rarely to be found on IRC, she is active on various instant messengers and LiveJournal, and can also be found on Second Life as Autumnfox Vesperia. She is the founder of Furry Grrls.

Autumnfox is on the event committee of the Western Pennsylvania Furry Weekend, acting as Volunteer Coordinator.

While orginally from Maine, U.S.A., Autumnfox has lived in New Hamsphire for a number of years, Florida briefly, and currently resides in Pennsylvania, having moved from California in January 2009.