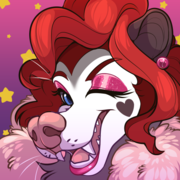 Austin Furry Burlesque (AFB) is a furry convention that will be held in Austin, Texas in January 8t/9, 2021 in the Austin-Pflugerville Courtyard Marriott.[1]

Austin Furry Burlesque is themed after a stage burlesque show[2] and plans to have a drag show and fashion-themed events such as a fursuit catwalk in addition to furry convention mainstays like a Dealer's Den, Artist's Alley, panels and so on. This theme was chosen as a nod to Austin having a strong queer community and being a hub for weirdness in Texas, as well as an indication that it is aimed at an adult audience..

Austin Furry Burlesque will be an 18+ convention, a safe space for adults, where attendees can be playful and provocative without the logistics of accommodating an underage audience.

Scarlett Reputation is AFB's mascot and all-purpose matron. She has been keeping Austin wierd since she broke onto the scene with her one-woman burlesque production of Carrie, The Musical.