Aushi is a male fursuiter[1], fursuit maker and performer who lives in New York, United States. He’s most notable for his character Scáth, a Dutch Angel Dragon. 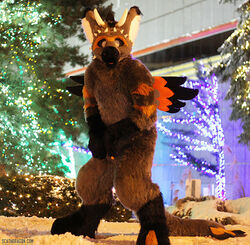 Scáth is a gray and silver Dutch Angel Dragon with orange markings[2]. The name "Scáth" is Gaelic for "shadow" and is pronounced "sk-aah". The character is sometimes seen at night wearing a bright glowing halo. The suit was made by J2R Costumes using a Skypro Fursuits head base.