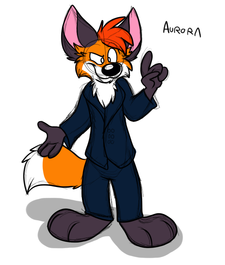 Aurora Fox as illustrated by TheDoggyGal. 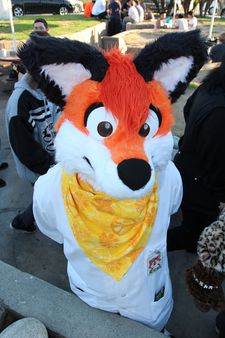 Aurora as he appeared at Califur 8. 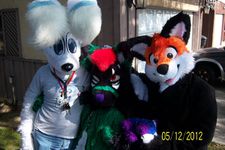 Aurora first stumbled upon the fandom in March of 2006 while doing research on animal abuse and has been active ever since. Aurora can often be found at The Prancing Skiltaire, Fur Affinity, and Steam playing as The Spy on Team Fortress 2 on SouthernCross Gaming's servers. His first furry convention was Califur 4, and was the 1000th person to register for Further Confusion 2012

His fursona. Aurora Fox, also known as Tipsy, is an anthropomorphic red fox wearing a suit with a pea coat (and sometimes green scarf) doing his signature "Fur thumbs Up" pose. The original ensemble was a green jacket with blue pants and a blue scarf.

His first fursona was a Yoshi by the name of Derry, who could be found roleplaying on various forums and Myspace, though he is rarely active on those sites now days. By February, 2007, Aurora began experimenting with different fursonas, at first an anthropomorphic wolf by the name of Sky Wolf, and eventually, his current fursona.

Aurora's hyperactive attitude and his second fursuit made by Kodi quickly rose him to recognition in the fandom and amongst furs at local California meets and cons.

After administrators and players expressed numerous interest in bringing Aurora as part of the administration team at SouthernCross Gamin], Aurora finally agreed and was quickly added to the board of administrators in early 2011 as part of the "Strawberry Update" during which he brought numerous new ideas and suggestions to the group which earned him the nickname amongst players as the "Fun Admin" or "Easy going Admin".

Aurora resigned his position at the board of administrators shortly after Further Confusion 2012 due to personal reasons.

Aurora expressed interest in getting a third suit at Further Confusion 2012. Little is known about his third version of Aurora except that it will be a Full Suit made again by Kodi, with a completion time of around late 2015.