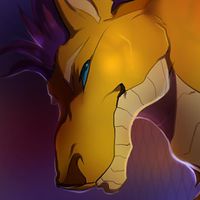 Auric Dragon is the fursona of Julian Mata (born November 15, 1991), a furry who lives in North Richland Hills, Texas, U.S.A.

The name Auric was chosen because Aurea in Latin means "Gold" and the suffix "ic" in latin roughly means the suffix "en" in English, therefor "auric" means "golden" which simply describe the color of his fur. He has also known better as DJ Auric and has been called Aurii

Auric is a Dragon/German Shepard mixed breed. A mutt if you will. Auric has light golden fur, the color of the morning sun. with a mane of light purple hair running down his back. Dark purple spikes begian at the base of his tail, and run its length, getting small towards the tuft of light purple fur at the tip. His short furred wings are slightly darker than the rest of his fur, and the 2 horns adorning his head are a deep gold color.

Auric is a very open minded individual, always willing to try new things, just to try them. He can be talkative sometimes, mostly about music and computers.

Auric is primaraly a DJ however, he does make music on the side. Auric mixes a blend of of Dance, Techno, Electro, Hardstyle, Hands Up, Trance, and Scouse for his DJ Sets, normally playing remixes of top songs,and older clasics, as well as top trance, and dance songs in Europe. He makes podcast about once a month, or more, called the Dragoncast hosted on a few different File Sharing webpages, mainly 4Shared and Copy.com