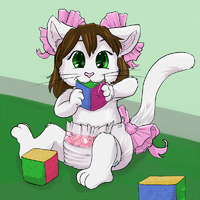 Aura's fursona is an 18 month old white kitten. She usually wears two pink bows on each ear and one at the part where her tail meets her bottom. Her hair is brown and down to the shoulders and eyes are green. Her tail isn't fluffy like a calico cat and the placement of the bows on the ears are random, but her tail bow is usually big, at least 1/6 to 1/4 her size since she is small.

Personality: Aura loves to explore and will crawl off if not held on to. she doesnt like to walk, but will toddle if needing to catch up or to be around someone. She is always chewing on something or a paci. She always carries around a pink blanket with white hearts on it.

An active member of the furry fandom since around December of 2011, Aura is spending most of her time either at school or on the BabyFur.me IRC Chat client.

Aura was making a new character for the game "Luna Online" and needed to think up of a new name. She liked the word aurora so she used an SL last name she had from 2009. fast forward to January 2012, and she needed a new name to start a new online life with after a few bad things that happened. Aura decided to bring the name back, but switch it around so that it is Aura Aurora rather than Aurora Aura.