Honey Bär is an anthro artist who lives in Southern Minnesota, U.S.A. As of 2018, the most common subject in their artwork is Five Nights at Freddy's. They also make artwork of their various World of Warcraft characters, as well as My Little Pony and Pokemon fan art on occasion. 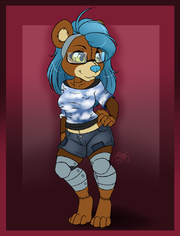 An image of Honey's fursona drawn by firefly8083 from FurAffinity.

When Honey was 12 years old, they were introduced to Furry in the way of fursuiter videos. Curious, they dug further, and found they quite enjoyed the artwork depicting these half human, half animal characters. By age 14 they were fully immersed in the furry community and had created a recolored Lucario fursona. Around age 17, they switched to a bear like creature with panda fur coloration, but later changed it once more to a more traditional brown bear palette.

They have owned and worn fursuits in the past, and attended conventions, too. They have worn different cosplays to these conventions as well as fursuits. Although recently absent from them, there is always a chance that they may resume con attendance in the future.

Honey Bär's reference sheet as of January 2015. Base made by Ajna from FurAffinity.

Honey's fursona is of an original race they created called Ursith, created after much thought on their public reputation and appearance. This character shares its namesake with its creator, and is generally used as an avatar of sorts, depicted doing everyday things Honey does, like gaming or shopping. The character is also more often than not accompanied by a number of different Pokemon characters from a pool listed as Honey's own, with an Eevee called Mocha almost always by the character's side.

This character is often used as a self insertion into different subjects, such as a Five Nights at Freddy's guard, or a Pokemon trainer.

Honey has been drawing all their life and has spent a majority of it posting their pieces online. A digital artist, they use a Samsung tablet to create images, sometimes sketching the picture first on paper traditionally, or in their program of choice, Medibang Paint. They are currently open for commissions, and can be contacted through a variety of social media outlets, including Tumblr or Discord.