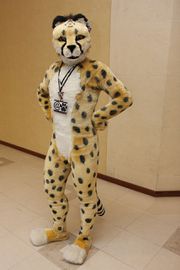 Atpaw (born May 29, 1981) is a fursuiter who first appeared in furry fandom as Jamie Wolf around 1996, taking the name of his first fursuit when he lived in Newcastle, Australia. By 1999, he had taken the form and name he goes by today, the cheetah named Atpaw. In 2020 he became a rubber reindeer.

Atpaw currently resides in Brisbane, Queensland, Australia, although he is fairly mobile around Australia. Atpaw has attended MiDFur, FurJAM, Rivfur, FurDU, EuroFurence and Further Confusion and in 2008 participated in the Sydney Gay and Lesbian Mardi Gras. Online, he frequents FurryMUCK and Second Life.

Atpaw's interests include 'anything fast', aviation, digital photography, fursuiting and fursuit making, motorcycling, mountainbiking and driving his Toyota MR2 Mk1 both recreationally and in amateur motorsport. Atpaw works as a professional mechanical engineer and has a fascination with vehicle technology and design.