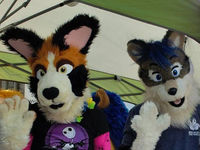 Salsa and Emo T Wolf, AtlWolf's fursuits. Often, as in this case, seen being worn by others

AtlWolf is a furry and fursuiter who lives in Norcross, Georgia, U.S.A. His fursuits are Emo. T. Wolf (purchased from Badwolf in 2010) and Salsa (purchased in 2012 from Wezen).

AtlWolf organizes furmeets in and around the Atlanta area. He also works as staff for Furry Weekend Atlanta Atl has also worked staff and hosted panels for many years, at fandom conventions such as DragonCon.

AtlWolf can be found on SecondLife as AtlWolf Blabbermouth, where he owned BadWolf, a furry hangout the was popular from 2006 until 2016. (The BadWolf group/hangout should not be confused with the person Badwolf, from whom Atl bought his fursuit.)