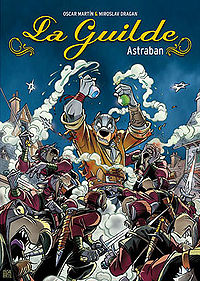 Astraban is an anthropomorphic comic-book character featured in Astraban: La Guilde by Oscar Martín and Miroslav Dragan. The 48-page French language edition is being published by Belgian publisher Casterman.

After celebrating his admission to the prestigious Academy of Alchemy, the young and impetuous Astraban saves the life of a girl from certain death. His chivalrous act costs him dearly as he sees his friends massacred the following day. While taking refuge from those pursuing him, Astraban has unknowingly taken his first step into the Guild.