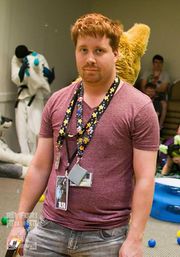 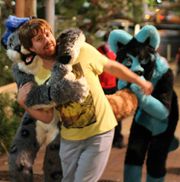 Ash with Snow Paws and Kidsune 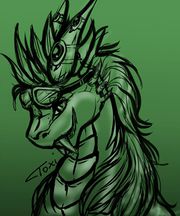 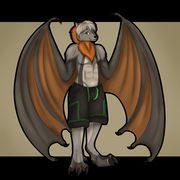 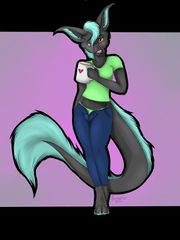 Ash used the name Axeleonth as an online alias before encountering the furry fandom. Ash has been working in the retail and hospitality industry since 2010 and currently works in the service industry.

Before joining the fandom, Ash frequently used Microsoft Messenger to role-play in the Pokemon, Kingdom Hearts and Resident Evil universes. He frequently socializes via Facebook Messenger and Skype, is quite easy to get in contact with and is reliable.

Ash first connected to the fandom sporadically around 2006 by visiting such furry sites as SoFurry (YiffStar) and FurAffinity. He changed his handle to Ashtonoir when he became involved full time in 2011.

It wasn't until 2013 when he became physically furry fandom by attending RivFur 2013. Though only attending the final day of RivFur 2013, he unofficially became a volunteer for the convention and was a part of the post-event's Volunteer Barbeque.[citation needed] He is a current staff member with the convention.[citation needed] He attends the Central Brisbane Furmeet.

Ash has three distinct fursonas that he chooses to identify as; Ashtonoir, a dragon/wolf hybrid, Aileron, a grey haired flying fox, and Diamond.