Arvada Tails is a furry meet and fursuit walk. It is held on the second Sunday of each month, in the Olde Town historical district in Arvada, Colorado, USA, including Mcllvoy Park and Fuzzy's Taco Shop. This location has become very familiar with furries, who are invited with open arms.

In April 2016, two fursuit makers, Kayleigh Grosskreuz and Noelle White, organized a small event in central Colorado for furries of the area to gather, eat at a local taco shop called Fuzzy's Tacos, and parade around the outdoor mall. Word quickly spread throughout the other fur meets of Colorado, and in its second month the event began to see attendees from as far as Canada and Colorado Springs, 80 miles away. Recently we had attendees from as far away as Germany. The relaxed atmosphere started to attract even more attendees, and by its seventh month it had as many as 46 furries. 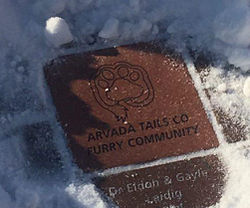 Arvada Tails brick, in the sidewalk of Olde Town Arvada

On December 18, 2016, a brick was revealed to the members of the Arvada Tails, following a donation of $200 to Olde Town Arvada. This money was first given to the Arvada Tails on September 11, 2016 by the Chairman of the Harvest Festival, Renee Nelson.

On August 13, 2017, the Arvada Tails staff held the Arvada Tails Dark Carnival Day in the Park. This was a "mini-con" intended as a tribute to Rocky Mountain Fur Con (RMFC), a local convention that was canceled earlier in 2017. The event was comprised of various carnival themed games for fursuiters, "The Punishment Game" made famous by Dae the rabbit during RMFC 2015, and even a dance showcase, featuring 7 routines. The mini-con saw 180 total attendees, and raised $95 for the Foothills Animal Shelter in Golden, Colorado.

Charity: Several members of the group help out in the community in various ways according to various interests. Some of these activities include; collecting donations for local animal shelters; back to school supply runs; food and book collections for local pantries and little libraries; knitting scarfs, hats, and blankets for the elderly and homeless; attending parties and hospitals; and cleaning up the trash in the local park.

The group is also known for dressing up and handing out stuffed animals and toys for children during the Arvada Olde Town Trick or Treat Street. This has been a tradition that has been ongoing since 2017.

In 2019-2020 Australia was on fire. Hundreds of plants and animals lost their lives and those left were starved and suffering. Waffles, a member of AT offered a free picture taken for every $5.00 donated. Furries in the group rallied, and together we raised $500 dollars. Money was donated to 4 different causes to help replant trees, offer food and medicine for the animals. An additional group set to work making "Joey pouches" for the baby roos and other animals.

In 2020 Covid made it's presence known. In a tough discussion with regulars it was decided to postpone the meets until it was safe to do so again. March 2020 was the final meet and Arvada Tails started up again on August 2021. To help encourage vaccinations, special prizes were awarded to those already vaccinated with a big teddy bead given out at the end of the meet. Additionally, masks were offered to anyone who wanted them.

In the December 2021 meet a raffle was run for a partial Fursuit. We collected $310 for the Foothills Animal Shelter. 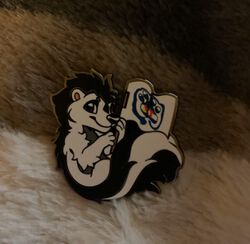 So what's up with the skunk? It's name is jingles. Back when Arvada Tails first started there were several fursuits that were black and white. There was a house cat, a black fox, a few huskies,and a few others. As the City of Arvada was getting used to us the question would arise, "Oh that's cute, are you a skunk?" No, we were not. But in a effort to comfort the public we went along with it. One of the group's members donated his tabby cat for anyone to wear. Anyone who wanted to try. Every fur who wore "Jingles" added their own flare to the character. Sometimes with different tails, or a steam punk outfit, or even the literal sense wearing a massive jingly with bells. This became a inside joke among the group. And we as a whole, we embraced a skunk. The emblem was designed by Voxia and has been used for various gifts through out the years.

As of December, 2016, the organisers of Arvada Tails are: 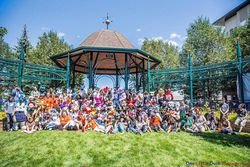 Other groups of furries regularly attend events hosted in the city of Arvada, such as festivals. Some of the past events have included: