Artica Lagopus is a character in Extinctioners. She first appeared in Extinctioners volume 1, issue 1 (story and pencils by Shawntae Howard, inks by Malcolm Earle, and color by Eric Blumrich and Scotty Arsenault). 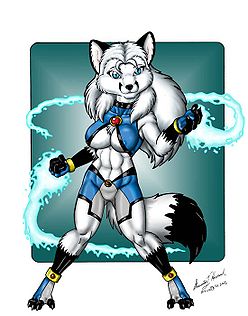 Artica was always an attention seeker. Born an only child in the Veron Opus section of the Space Station Alopex to a pair of astrobiologist, she would often find herself trying her best to fit in with her peers and acquiring notoriety anyway she could.

Joining the station’s military academy,rather than a science division as her parents would have wanted her to, she discovered she was a very skilled starship gunner, receiving top scores in her class. Her life would take a dramatic shift when one day prior to a big team work examination, when she would have been paired with her crush, Red Firefox, she became violently ill due to her powers manifesting. Eventually, her body would learn to cope with it’s new evolution and she would discover that she has cryokinetic powers that she could freeze objects with a touch, create blasts of ice by rapidly dropping the temperature of the moisture in the are, and even animate ice constructs she would create. These powers would come to save her life on the day Alopex was attacked by an alien force, destroying the station and causing her and her class teammates to escape on board the starship Solarfox. They would follow the invading force back to Alden and with the aid of Phenix, Artica and the Solarfoxes would help liberate a camp of captured Hybrids.