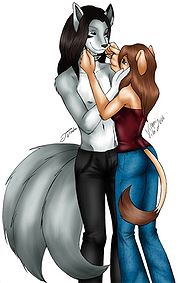 Artiamus' fursona is a gray and white, three-tailed kitsune. He is a writer and artist, who mainly draws abstract art and designs maps for the multitude of worlds he creates and populates. In September, 2007, he began work on a large map called Circe, that spans several pages, the starting pieces can be viewed on his Fur Affinity page.

After a brief stint in the Army during 2008, that ended due to medical reasons, Artiamus dedicated himself to the creation of a role playing game that has been titled the "Den of Evil" (DoE).