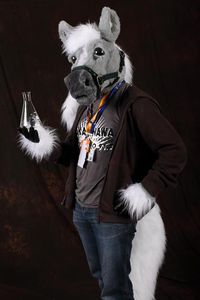 Artax is a Hampshire based furry who has been part of the furry fandom since 2000 after the collapse of therian groups such as lycanthrope.org and WereNet under the previous name of ForeHoof.

His namesake comes from the unfortunate horse character in the cult 1980s book and film The Neverending Story.

Currently Artax is owner of the FurNet IRC channel #southUKfurs, created as an alternative to the #northernfurs channel. Founder and owner of the company Orcahorse which design and sell halters, bridles and other tack for various equine avatars within SecondLife.

Artax's first fursuit was acquired through FurBid, and was a snow leopard with purple hair named 'Glacier' made by Synthwolf, which appeared occasionally at the LondonFurs meets. This was sold on to another furry in 2010.

His second fursuit, made by himself, is of his pony fursona and first appeared at ConFuzzled 2010.

An amateur, and often preferring to draw in traditional media - usually pencil sketch or acrylic on canvas, Artax has published most of his work on Fur Affinity. In the past, he has also sold a limited number of conbadge commissions of more realistic representations of other's fursonas.

Also mostly published on Fur Affinity is Artax's music. He started composing using Amiga based 'trackers', but currently uses PropellerHead's Reason software with midi controllers such as Creative ProdikeysDM and Roland EG101 synthesizers to create a mostly (although not limited to) new-age and contemporary style. His music won the WereRadio jingle competition and he also composed for certain UK RobotWars competitor's website media.