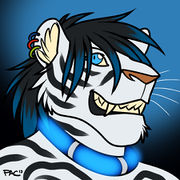 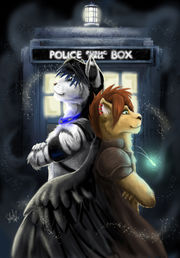 Arsen Delacroix, also known as Arsen Graff on Second Life, and Arsen (on Tapestries MUCK, SoFurry.com, and Weasyl), is a furry whose fursona is a white Siberian tiger Time Lord. Considered a greymuzzle by the common furry standards and has been in the fandom since 1995 as writer and owner of the now defunct www.yiffydreams.com website. Formerly known as Pylon and still uses the name for his Fur Affinity username. Currently resides in the San Francisco East Bay Area in California, USA. Born in 1979, he's a permanently physically disabled fur, spiritual about his "furry identity" and loves to write about various adventures in the Dr. Who universe.

A Timelord tiger that had lived 10 lives before through regenerations before being recalled to "The Last Great Timewar" and fell into the genetic looms while trying to secure them for the continuation of the Gallifreyain Race and future Timelords. While being physically disassembled, he fought hard to keep his consciousness together and his Tardis extended its power to increase his Reality Quotient in order to save the Timelord it was bonded with. This however, came with a host of consequences. The Timelord, while able to regenerate, was unable to change physical forms as wells being unable to control his own body temperature to the point that he couldn't not function and the heat made him delusional. His body was allergic to the heat due to he couldn't sweat which caused little red bumps all over his flesh to raise up and itch with a maddening sensation. He resigned himself to a chilled Tardis interior, the console room's floors and walls were frosted with how cold he needed the living spaces were to keep his temperature down. He did find, through contact with various races in different planets that he had the ability to control water and ice... with them he was able to cool his body down enough to enjoy warmer climates till he was poisoned one night at a bar, leaving him temporarily unable to control his powers. He scratched, clawed and almost bled out in an alleyway until he passed out from blood loss. A nanobiologist picked him up and spent months repairing the physical damage as well as introduced self replicating nanites into the Timelord's biology. A metal, seamless collar with three illuminated blue rings, was built around his neck to help provide power, control the nanites and keep his body temperature down around 50 degrees Fahrenheit to provide him a broader range of heat tolerance.

He spent his time using his War Tardis, Dreadnought Class, and various skills he's learned along the way, to help make up for the pain caused by the Timewar and the damage done by the Daleks which in many cases, ripped holes in Time and Space with their technology and inferior time travel vessels... to save those who were displaced by these tears of time and dimensional space. While he's donned a cloak and black feathered wings at times and his sonic device extends out to a full scythe... rumors flew many civilizations that he was the reason for folklore and depiction of the Grimm Reaper and the Angel of Death as those he chose to save, were never seen or heard from again. While partially true, he did bring those he saved back to their own time and their own dimension.

Arsen is a 8'5", quarter ton Amur Tiger with black hair and blue tips. His bones and muscles are denser than most, providing him with a solid form that can withstand most physical blows. He possesses sapphire blue eyes that pulse with a glowing blue energy within each iris every 3 seconds like a heartbeat. Upon his forehead is a blue magical circle as a symbol of his ice/water abilities as well as his technomage abilities. It's a symbol he takes pride in. All of his claws are living metal which he keeps well shaped and polished. His tail and tongue have a sense there's more to them than meets the eye. Both of them can extend at will and retract as if normal... while he keeps his tail longer than most of his stature, it's always up off the ground. His paws are heavy, broad with paw-like thick fingers with traditional pads upon all four. He does have other attributes that would be best saved for more personal interactions.

As mentioned before, his body temperature is controlled primarily through his collar and his exhalations are chilly, fogging the air as if he was a bull in the middle of winter breathing out. He has a tribal circle pattern upon his chest that blends in well with his stripes with two bluish tribal paws that extend upwards at an angle along the hipbones, pointing outwards to his sides. Along his back are blue tribal wings that house his black feathered wings when they aren't in use. Down his spine is red Japanese lettering that has a double translation but for the sake of remaining PG "Tiger Loves Lions". His lower back contains a little more tribal lines before his right flank, down the back of his thigh contains little paw prints that point upwards.