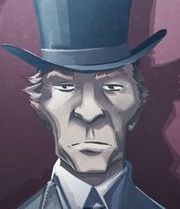 Arrugusk in his human form

Arrugusk WWolfe is person whose character is a werewolf that has the ability to turn from human and back. He joined the fandom on September 14th, 2009. Some in the fandom refer to him as a troll due to his almost never-ending behavior (see below).

He is rather antisocial and prefers to mock furries and people that he thinks are wrong, or if he doesn't like them. Arrugusk doesn't want to be a troll, and he says that he is against trolls and that this is just who he is. He does have the ability to be nice, he just doesn't use it too much. He prefers to joke frequently. But by jokes, he means not just 'idiotic' jokes like Knock-knock jokes, but cruel and funny jokes that can make anybody laugh or make people quite angry. His favorite pastime is insulting people in a smart-like intimidating and unusual way. This is, if he likes to. He has noted on some of his pages that he does not care about losing a friend or about other peoples problems. Instead, he decides to make it worse for others which is usually why others do not go near him, both in real life or on the internet.

Arrugusk was born in Ireland on July 8, 1994. By the age of 2, he moved to England and stayed there for 5 years. He then moved to Denmark at the age of 7, and stayed for 3 years. He learned Danish and a little bit of French because of some of the students. After that, he moved to Australia, where he stayed for 2 years. He now resides in Philadelphia, Pennsylvania in North America at the age of 16. He does not care what anybody thinks of him, and he likes to listen to music in his spare time and draw art. Arrugusk plays World of Warcraft and is known as 'The guy who is grumpy all the time' on the EU server Nagrand.

Arrugusk is not known as someone with a mass amount of friends. However, one of the friends he is particularly close to is Echo Tiger. Even as friends he is known to jokingly insult Echo when he wants to. But, since they have known each other for quite some time now, Echo has picked up on the fact that Arrugusk is known for this behavior, so they probably never get into fights about this.