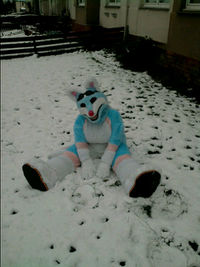 Aroo Breastentein is a female fursuit-builder, furry artist, and fursuiter from the North Lanarkshire town of Kilsyth near Glasgow, Scotland. She was born and raised in Northern Ireland and moved to Scotland in 2007 where she became active in the furry fandom desppite being a sideliner since 2004.

Aroo's fursona is a Wolf.

Aroo owns around nine personal suits of characters she has created, including cheetahs, mongrels, and kangaroos. She also owns two "cosplay fursuits", of Houndoom from Pokémon and Renamon from Digimon.

She also stores the fursuits of her boyfriend and best friend, bringing the number of suits in her possession to a grand total of twenty.

Aroo builds fursuits in her leisure time, she does not take on commissions anymore but sells on premade suits.