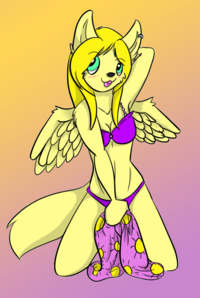 Arle is a beach wolf at heart. Lines by MaskedPuppy on FA 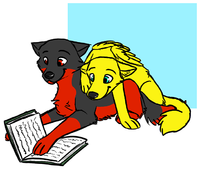 An example of Arle and Davana in their feral wolf forms, enjoying a book. By Suze on FA 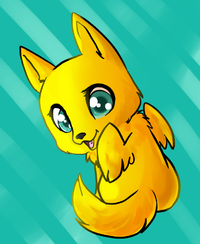 A chibi of Arle in her feral form: drawn by Freckle of FA

Arle is a female wolf with golden fur and both a feral and an anthro form. Her anthro form has creamy yellow fur and yellowy blonde hair, while her feral form is only yellowy gold in color. Both forms also have a pair of feathered wings, which can vary in size.

Arle can be found under two usernames on Fur Affinity, MyLordsLover, where she posts art that she has made herself, and then her account where she posts commissions she has bought and free art she has recieved, Arle.

She has many different friends of all kinds, her best ones including Aryia and Filut, with whom she attends college, several friends from her local furmeet group Eastern Fur Meets, and some widely scattered online pals such as Bee, who she primarily purchases art of herself from, and Carrot Wolf, Bee's mate.

Arle is happily "engaged" to her girlfriend Davana, who she has been dating for two years as of 2/5/10.

She has managed to gain a small bit of fame on FA by selling "RunRun" icons, which she made using the free base provided by Yo-Angie on deviantart. Yo-Angie graciously granted her permission to use the base to make icons to sell.