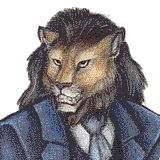 Arian (aka Arian Maral) is a wizard (specialized in space and building) on Sociopolitical Ramifications MUCK (SPR). A male Lionman, he was created in June 1995.

Arian built a significant amount in the space area of SPR, became a wizard in late January 1996, acting as co-space wizard with Murphy, aka Murphy the MUFMouse. He built and Murphy coded. Arian had no coding skills at that time, but was a builder and roleplayer.

When Murphy left in late '96 Arian took over the role of space wizard. Space was largely inactive between late 1996 and early 1998, during which time Arian taught himself to program. On July 23, 1998, his first programs went live and SPR Space was restored, with the new name SocioSpace.

The character Arian Maral is the President and CEO of TranStar Incorporated, the largest megacorporation in the known galaxy. His designated heir is his son Arrlan (RP alt of Arian) and his closest advisor is the head of Corporate Internal Security, Aleksanr V. Romanov (player). Arian resides in his estate, located on the planet Capitol in the TranStar System.