Aresues is a furry writer who lives in Perth, Western Australia. He is the author of 'Shades of Grey', his first story series, which revolves around his character, Shayde. 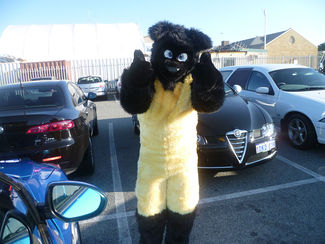 Aresues came into the fandom late December, 2008, where he spent the first 6 or so months almost inactive. He discovered the fandom through the art of Foxxfire, and then on through Athus Nadorian. Since mid 2009, he started writing stories about his fursona, Shayde, and has commissioned many an image of Shayde, as well as several illustrative images of his stories. He attended Anthrocon 2010, where he debuted his Shayde fursuit.

Aresues' stories revolve around Shayde, and his job as a bounty hunter, and are set in a mythical world called Tayuna. He has also written two past stories for Shayde, and one each for Xani and Samiake. A second Samiake-centric story ties into the end of Shayde's Story Chapter 5, and paves the way for the next chapter. 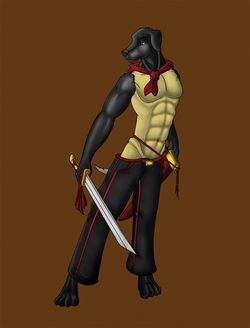 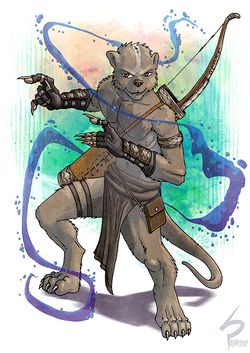 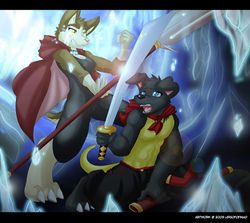 Shayde and Xani forced to fight.

The four dragons from the series. From left to right; Glayce, Nocturne, Jade, Firolf.

The Good (well, not the bad)[edit]

Shayde is a bounty-hunter, and uses a katana as his weapon, which is revealed to have been treated by alchemists to resist most forms of damage. He is the main focus of Aresues's first five story chapters, entitled Shayde's Story. His parents were killed while he was a pup, and he harbours a deep hatred of tigers, due to his parents' murderer being a tiger. At the end of To Live By The Sword, he is killed by his own katana, drenced in acid. He is now reunited with his long-dead parents in the Deadlands, but wishes to return to life.

He reappears in Deathly Threats, where he is attempting to overthrow Nocturne. He is currently experiencing a personal hell; being trapped in a featureless, bakingly hot wasteland.

He also reappears in Deathly Threats. He has been cursed to feel unendurable cold for his crimes of rape and murder. He is set to help Glayce overthrow Nocturne, and he also hopes to exact revenge on Shayde for killing him.

Like the other major antagonists, Firolf appears in Deathly Threats. His power has been reversed; he cannot control sand anymore, as it instantly turns to glass when it approaches him. He stays near a desert, constantly tormented by the sands he cannot touch, and is willing to help Glayce and Slate overthrow Nocturne, so his power will be restored.

Below is a list of stories Aresues has written, in chronological order, and a brief summery of each.