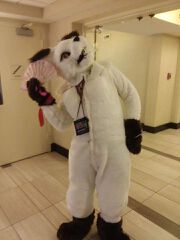 Arcticina Fox, or just Arcticina, is a fursuiter who lives in York County, Pennsylvania, USA.[1]

Arcticina joined the furry fandom in the early to mid-'90s.

Arcticina's fursona is a female arctic fox with brown tips on her ears and tail, her paws are all brown with pink paw pads, and her tongue is also pink.

The fursuit Arcticina Fox was made by Brian Hayers Jr (Badger Punk) in 2017. Besides Arcticina Fox, she also owns Black Foot Da Femboy Indian Wolf, which has been retired, and Sparky Husky, also retired.

Arcticina's YouTube channel dates back to January 4, 2009, but she didn't start uploading to it until May of 2009. This YouTube channel used to belong to Black Foot Da Wolf, but since he/she is retired, Arcticina decided to take it over it, along with any other accounts that Black Foot was on, including social media.

She doesn't make that much content because she doesn't know that much about editing videos. She currently has only 95 subscribers, with 4,343 views if you want to check out my channel you may do so: Arcticina's YouTube Channel