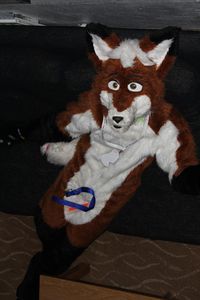 Arco (born June 16, 1986), also known as Iybran, is a fursuiter and fursuit builder who lives in York, Yorkshire, England. His fursona is an Arctic fox/red fox hybrid.[1] Arco is mated to the fursuiter Draks.

Arco constructed both his and Draks' fursuits. He debuted his own fursuit as a partial in a Yeovil furmeet in 2009, upgrading to a fullsuit in 2010. Always open for commissions, Arco has made various other costume parts for other fursuiters.