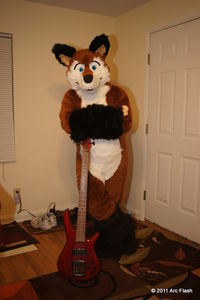 Arc Flash Fox and his 5-string

Arc Flash Fox is a fursuiter who lives in Easton, Pennsylvania, U.S.A. His fursona is a red fox.

Arc Flash owns one fursuit: Arc Flash, the fursuit of his fursona. This fursuit was built by Kodi Pup and debuted at Furstivus in Philadelphia, Pennsylvania, over the 2012 New Year's weekend.